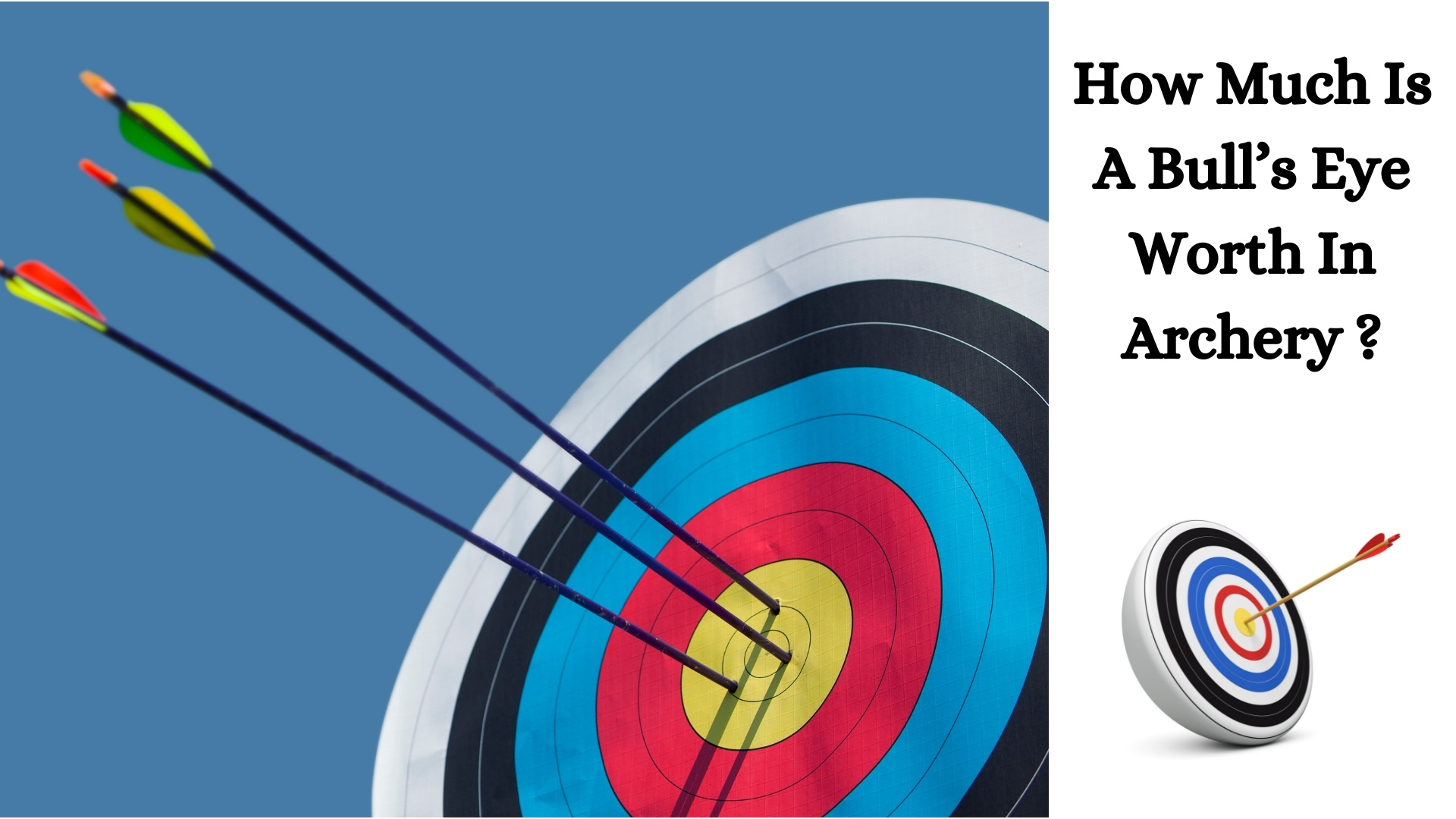 How much is a bull’s eye worth in archery?

Why is the bull’s eye is termed as a bull’s eye?  I have wondered about this unique

Naming and its roots are significant. The archery target bull’s eye style has its origins

in England, so many of the theories come from England. One is the English longbowmen used to target practice using the skulls of bulls and many will try to practice precision in the eye of the skull. Another is that the goal center was similar to a flat coin used in England long ago and the flat coin was called a “bull’s eye.” The reason this may probably have been called so was that this coin was sometimes used to bet in bull-baiting contests, hence earning its “bull’s eye” name.

“The word “gold” is used in some archery practices in contrast to “bullseye”. In target archery, it is worth 10 points to reach the center ring of a foreign target or 9 points if it’s an Imperial target. In the sport of archery, whether you’re a novice or a pro, everybody wants the “bull’s eye” when they practice their target shooting or competitive archery.

But if you’re a total archery novice, you may know that the bull’s eye is a good thing, but why do they all want the bull’s eye to be made? Of all the rings found on the target, the bull’s eye is worth the most points. A total of ten points is worthwhile, which can make all the difference if you’re competing. Since the center is the smallest part of the target, it demonstrates your precision and your ability from a distance to hit tiny targets.

There are so many different styles to choose from when you want to start competitive archery. For each form of archer, there is something! Some info on competitive archery and the rules of the game are available here. I’m going to focus most of this article on why the bull’s eye is so vital, how the scoring system works, and some tips from the pros on how to do well in a contest!

Now you must know about the numerous types of target types. There are several Target types you may encounter depending on the type of competition you are participating in, whether you are shooting indoors or outdoors or what kind of bow you are using.

At first, a typical metric target used in international competitions normally begins on the very outside of the target with white, followed in the very centre by black, then blue, red, and then gold. For each colour, there are usually two circles. The type of target based on the imperial measurement system used by Archery GB (Great Britain) has five zones instead of ten, with a slightly different point system, but we will only concentrate on the standard metric target for simplicity. The points related to each ring are not so complex rather it is very convenient to remember. From one point, they start and go to ten points. One point is the very outer white ring, followed by the next ring, which has two points, three points, etc. The very middle golden ring, otherwise referred to as the “bull’s eye” or the 10-ring, is a total of ten points (no wonder), which is why the ring is so coveted after the mark. The 10-ring is also sometimes referred to as the “X-ring” because it is generally labelled in the middle with an “x”.

Here’s something that could help you recall the 10-ring’s meaning!!

If you hit the bull’s eye as much as you can, it’s certainly going to help your competition score! So that’s what the colours on the targets mean, however the target you end up using will vary depending on what kind of archery range you’re going to shoot in and what kind of bow you’re using.

Archers carrying a recurve bow shoot the target from 70 meters range, if you are interested in outdoor target archery. The target is fired from 50 meters away by archers who use a compound bow. The targets are also different for recurve archers and

Directions to use the Scoring Guide

If you’ve ever been bowling or played competitive golf before, then the guide to archery scoring is not at all very different. If you are shooting part of a club, you would usually need to fill out your name, then the name of the club and your member number, the number of the target you are shooting at, your type of bow, round number, date, etc. Personal data needed can vary depending on where and what organization you shoot targets or compete with. Firstly, don’t forget to write down your name, please. Since day 1, your first grade teacher has been asking you to write your name. If you fail to write your name, all the points you won will not be returned to your name until that time, and will probably just be thrown out. We’re not going to forget to write our names. It usually has several boxes for writing the scores for each shooting process. This can also differ, depending on the type of competition and the company you are competing with. You will write down the number of points associated with the ring that you end up hitting with your arrow with each shot you make. Generally, you shoot six times a line, and then you can add them together after entering all your points from each individual shot to get your score for that specific set. When you go through each segment, there is sometimes a section called a “progressive score,” where you can add the final score as you go on a continuous basis. Generally, there will also be a scorer assigned to you if you are playing, and you will need to get their signature in order to properly send in your scorecard.

Now as you know about the pointing system and the scoring guide, ypu have to learn some tips to hit the bull’s eye. All you need to hit the bull’s eye is to be relaxed and have a confident attitude towards your goal. Make sure you have arranged your equipments beforehand as well as familiarize with the range!!